Only in Las Vegas can you meet Elvis and Austin Powers on the same street corner.  If you add Johngy in the equation, you have one odd, but cool trio.
About a year ago, I was enjoying a week in Vegas.  A week in Vegas.  Oh how awesome that was.  Yikes, now I am getting sad...
Anyway, all along the strip, people dress in costume, gladly posing for pictures with the pedestrians.  They usually pose for free, although gratuities are always welcome.  Some are extremely good, while some are not so good.  Still, I give the people credit for standing out there all day in costume.
When I encountered "Elvis Presley" and "Austin Powers", I got a little good and a little not too good.  I think Austin did a great job.  Oh, of course, he could have done better, but this isn't a major production, so I kind of grade on the curve.
Elvis, on the other hand, didn't quite get a pass.  The entirety wasn't bad, but I have seen lots better.  Heck, I even see better at the local pub (in Jefferson Park, IL) on Elvis night.  What's with the tshirt under the jumpsuit.  Surely the big E never wore an undershirt.  Maybe a scarf or two (which he would whip into the audience), but never a white tshirt.  He left those for Fonzie.
Maybe I shouldn't be so hard on him.  Afterall, I think I did smell a little peanut butter and banana on him. 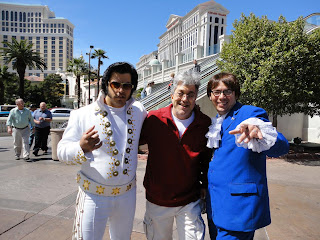