This is a weekly series featuring friends who have met celebrities of all sorts.


I met Louis Tufano at a POWW (Purely Obsessed Wrestling World) event.  Louis was their new ring announcer.  He came up and introduced himself to me.  I liked him right from the start.
Of course, I asked Louis for an interview (which can be found here).  I learned a lot about Louis before and during the interview.  He is one interesting guy.
He obviously has an interest in wrestling.  I learned he was also a ref earlier in his career.  Most interesting, he told me that he has a huge action figure collection, which can be see on his Facebook page.  He has some great figures there.  It is cool to see that many.
Louis (or the Big Loubowski or even Shrek) surprised me by asking for a JohngysBeat.com shirt.  He then surprised me even more when I saw his daughter Reese wearing one of the shirts I gave him.  A father-daughter JohngysBeat.com shirt combo...how cool is that?
I think Louis is one of those soft-spoken, laid back guys who probably has about a thousand great stories.  I hope to hear some in 2013, as well as more about his action figure collection.
He has a bunch of pictures with wrestlers and other celebrities on his Facebook page.  I picked one with JohngysBeat.com favorite Christy Hemme.  (I went all of 2012 without seeing Christy...I miss her, but I digress).
Hopefully, I will interview Louis again in 2013.  I definitely plan to feature him here again.  He has a lot of awesome pictures.
I really appreciate Louis for reaching out initially.  I appreciate and respect him.  You should come out to POWW and see Louis and some great wrestling, too.
To learn more about Louis, see all of his pictures and get his updates, go to the Official Louis Tufano Facebook Page. 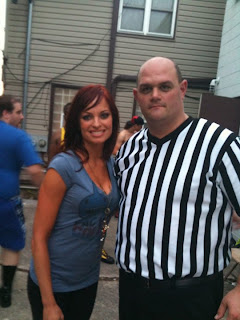 Christy Hemme and Louis Tufano in Chicago area, IL-August 2010.
Posted by Johngy at 6:00 AM