At Wizard World 2011, I met the Blue World Order (aka Stevie Richards, Brian Heffron and Mike Bucci). These guys are legendary for their wrestling success, especially in ECW.  I was ecstatic that I got to interview each of them separately, although I think they all appeared in each interview at some point.  Not only are these guys a lot of fun, they all had very interesting thoughts on wrestling and other topics.
Tommy Else also met the bWo and from the look of the picture, he was as happy as I was to meet them.  Tommy is a big wrestling fan and has met quite a few wrestlers.  I think Tommy would have made a good addition to the bWo, maybe as an enforcer (ala Arn Anderson?).
At the time of the event, I did not know Tommy yet.  I met him at a Resistance Pro Wrestling event.  In fact, I saw him at many R Pro events.  I also took one of his fitness classes.  Tommy runs T3 Fitness and if it was closer, I would go to more classes.  Tommy is also the brother of Mike Else (aka Professor Kliq), who I also consider a friend.
Over the year or so, Tommy and I have become friends.  He is really a great guy.  He has helped Matt (my nephew) and me many times.
I went to R Pro for some fun wrestling action and I came away with several friends, especially Tommy.  This is just another example of the impact of R Pro.  It really is like one big family and it is definitely a great time.  I am sure I will see Tommy at the next R Pro event, Stay Hungry, on January 18 in Merrionette Park (IL).
To learn more about Tommy, you can check out the T3 Personal Training site or T3 Fitness on Facebook.  You can also go to ResistancePro.com for more info on this great organization. 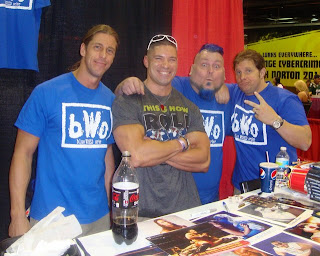 Stevie Richards, Tommy Else, Brian Heffrom and Mike Bucci in Rosemont, IL-August 2011.
Posted by Johngy at 6:00 AM

Great post. Those wrestlers bring back some good memories.

Thanks. They were great. Even now, when I see Bucci at R Pro events, he always comes up to me. Totally cool guy.