Everyone has seen the JohngysBeat.com shirts which I shamelessly promote.  While I had no plans on expanding the Johngy line, apparently someone had other plans.

When I was at Lerner Newspapers, Joey Rodriguez joined the company as a graphic artist.  Bright and talented, Joey eventually became the Manager of that department.  Joey brought a unique style and energy to the department.
Joey was responsible for designing some of the beautiful ads for my Newspaper in Education program.  He was part of the reason the ad series was so successful and for that, I will always be grateful.
Recently, Joey sent me a new creation of his. 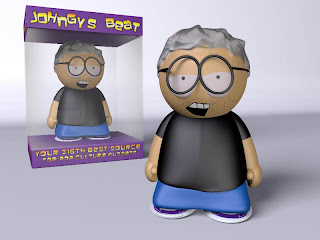 This is ridiculously cool.  Granted it is not a real action figure, but how many people even have a simulated version of themselves as a figure?  Really, this is totally awesome!
Joey wasn't finished though.  He had to kick it up a notch.  He made an Aquaman-themed version.  This is just too much.  This is too darn funny! 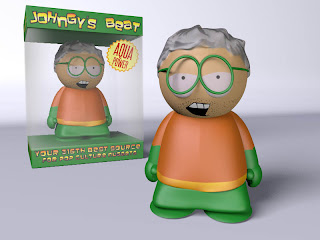 I love the attention to detail.  Green glasses for the Aquaman version!  I could not have dreamed up anything nearly as cool as these prototypes.
I want to publicly thank Joey for doing this.  It was unsolicited, but very appreciated.  Joey was a good friend at Lerner.  Despite being insane in his own good way, Joey was often one of the few sources of sanity within a crazy mess.
For all of that and for these two great Johngy toys, thank you very much, Joey!
Posted by Johngy at 6:00 AM

Well this would be great! Yes, I would buy a Johngy action figure!!! Maybe even for Christmas gifts!!

They ate both very cool!

I gotta have one of each!!!