My old grade school buddy Tom Skalski turned me onto Steve Dahl and Garry Meier way back when.  Therefore, it was only fitting that I finally met Garry when I was with Tom at a recent Hawks game.  Actually, Tom was the reason I met Garry, only Tom didn't now it and I later found out I was mistaken anyway.  Allow me to explain.
As we entered the United Center, we spotted Meier at a broadcasting table.  Tom walked up to him and started talking as if they were old buddies.  I just figured they were, because I knew Tom did some work in broadcasting while in college and he knew some radio personalities.  I just assumed he knew Meier, too.
Because of that, I followed Tom and talked to Meier, too.  Actually, Meier probably thought I was goofy, when I explained I was a longtime friend of Tom.  Still, Meier was very cool and took the picture with me, even though he was pressed for time while doing the broadcast.
Later, as I rejoined Tom, I mentioned that I did not know he knew Meier.  He then stated that he didn't know him, but he spoke to him about some long-running radio jokes of Meier.  Well, that explains why Tom did not introduce me to him!
In any case, it was great to meet this Chicago radio legend.  Who would have thought that I would still be listening to Meier some 30 years after first hearing of him?!  If Meier ever reads this, I want to thank him for so many years of great radio! 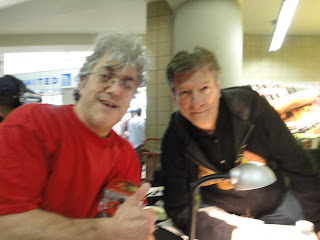 Who would have thought that Gary Meier would end up at WGN?

Who would have thought Garry would still be on the air, but not Steve?
And Johnny B is there at WGN, too.
Very odd.