By the time They Live came out, Keith David had already been acting for several years.  He even appeared on tv's Mr. Rogers' Neighborhood.  I am sure I had seen him in some of those productions, but I don't really remember him before seeing him opposite Roddy Piper in They Live.
They Live has become a cult classic.  It's just one of those movies.  Piper could spend days at a convention signing those famous sunglasses and adding the equally famous "bubblegum" line.
At the recent Days of the Dead convention, his They Live co-star Keith David joined the fun.  I am not sure if it was his first convention, but I know it was his first around here (score another one for another Adolfo Dorta).  Fans were wildly excited about the possibility of getting dual-signed pictures of the co-stars.
Opportunities like that are rare.  This is just another reason why Days of the Dead is a great convention.  Adolfo gets it.  He puts on a show that the fans will like.
Keith was very nice when we met him.  Matt had him sign a They Live poster, which he later had Piper sign.  I saw a lot of those posters being signed by both men.  It seemed a successful day for Keith and for his fans (and there were a lot of them).
Keith has been very busy acting and ding voice-over work.  A little trivia...he is the first actor to provide his voice for two films nominated for Academy Awards for Best Animated Feature
This is just another example of the great fun at Days of the Dead.  Check out DaysoftheDead.net for more info on this awesome convention. 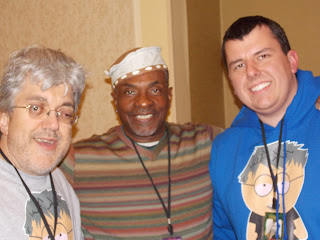 Keith David, Matt Parker and me in Schaumburg, IL-November 2012.
Posted by Johngy at 6:00 AM