I have seen Kitty Zombie at horror conventions for years, but I finally met him a couple months ago.  Kitty Zombie is quite a character.
Sometimes called Kitty Zom, it is said that he has "the body of a killer and the mind of a puppy."  If that is the case, why isn't he called Puppy Zombie?  While I am at it, he doesn't really have the body of a killer either.  (Yes, I stay up at nights thinking about these things.)
In any case, Kitty Zombie is a popular attraction at horror conventions, at least in the midwest.  I don't think he ever has his own booth, but he gets stopped by a lot of fans for pictures.
If you ever have met KZ, you will understand why I have not been able to interview him.  You can also check out KittyZombie.com to get a better understanding, although I am still not sure you will understand him.  At this point, do you even understand me?
While an interview seems unlikely, I will set a goal for 2013 concerning Kitty Zombie.  I will get something on video from him, although I am not sure any of us will understand it. 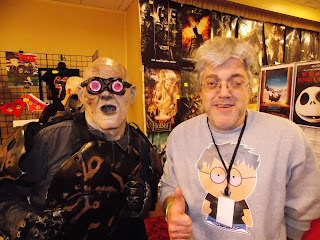 Kitty Zombie and me in Schaumburg, IL-November 2012.
Posted by Johngy at 6:00 AM