I first met Amazing Kong at Resistance Pro's "Sad Wings of Destiny" in December of 2012.  Kong (or Kia Stevens) was a special guest for the meet-and-greet.\.
Kong's history reveals her to be a devastating force in the world of wrestling.  Her size, skills and attitude struck fear in the hearts of all of her competitors.  Here though, she was just meeting fans, signing autographs and being very friendly.  She even smiled a lot!
That all changed though later in the night when she attacked Melanie Cruise.  Kong was all business.  This obviously would set up a future match between these two.  That match was supposed to happen at "Stay Hungry" in January.  Unfortunately, Cruise was suffering the effects of a concussion and vacated the title.  Kong won that title in a four-way match between her, Nikki St. John, D'Arcy Dixon and Thunderkitty.
Cruise had been the only holder of the Women's title in the history of R Pro.  She had been a great champ.  The fans had been so behind her that she became a "good guy" wrestler.  The concussion might have caused Cruise to step aside temporarily, but she will be back and we are all anxiously waiting for a Cruise-Kong match.
Until then, I must give Kong her due respect.  She started in R Pro where she left off with other companies.  She is a very talented wrestler.  I really look forward to seeing some interesting match-ups between her and other women wrestlers in R Pro.  Congratulations to Kong! 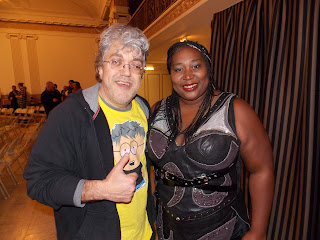 The Amazing Kong (Kia Stevens) and me in Chicago, IL-December 2012.