This is a regular series which attempts to combine my lifelong passion for bubblegum cards with my interest in celebrities.

Frank Shamrock is MMA legend, holding too many titles and records to list here.  He overcame a troubled childhood once he settled into the Shamrock home, where he became the younger brother of another MMA legend, Ken Shamrock.  The Shamrock home was in Northest California, which might explain the Sharks sweater.  On the other hand, it could just be any number of other reasons.  Who am I to question Shamrock?  I do like the inclusion of a title belt on his Celebrity Jersey Card. 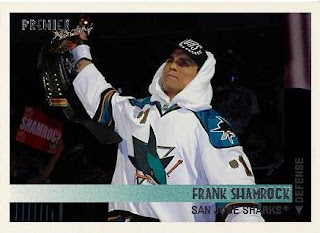 While Shamrock is an MMA legendary fighter, Dana White is an MMA legend from a different perspective. Currently, he is the President of the Ultimate Fighting Championship (UFC).  White has helped make the UFC a huge success.  His promotional work has garnered him many awards and accolades.  Despite growing up in Maine and being an avid Red Sox fan, this Celebrity Jersey Card features White in a Calgary Flames jersey. 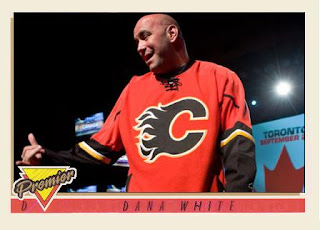