When I heard that Billy Corgan was getting involved in wrestling, I was surprised and skeptical.  Why would the front man for the Smashing Pumpkins want to get into wrestling and what did he know about running a wrestling company?
Most wrestling fans think they can be the best match-maker and the best story writer ever.  Just ask any fan.  They will gladly talk to you for hours about their brilliant "original" ideas.  I wondered if Corgan was just a big fan...a famous one, but a fan nonetheless.
Over the last year and a half, I have learned that I was right and I was wrong.  Corgan is certainly a wrestling fan.  Unlike most fans, Corgan has been able top put his ideas into play.
As the Creative Director for Resistance Pro Wrestling, Corgan has helped guide the young company to a position of prominence on the independent wrestling scene.  That is not an easy task for a start-up wrestling company to accomplish in 18 months.
Indy wrestling companies don't have the luxury of signing wrestles to long-term exclusive contracts.  Imagine trying to plan out storylines, with the uncertain status of wrestlers two to three months away.  Matches had to be reworked or scrapped due to the sudden unavailability of any given wrestler.
They also don't have the big bucks to lure established wrestling stars.  Oh sure, Corgan could have dumped part of his fortune into the company to grab big names, but that would not have necessarily made R Pro a success anyway.  R Pro has thrived on dedicated, talented, hungry wrestlers, like Melanie Cruise, Robert Anthony, Jay Bradley (who has signed with TNA Impact), Nikki St. John and several others.  R Pro has even developed their own upcoming superstar in Eric St. Vaughn.
All of this is done while Corgan also pushes R Pro in several other ways.  Television contracts, expansion into new areas and other such things occupy Corgan's time as well.
I must be honest and admit I have not liked some of Corgan's stories.  I have questioned some of the matches and logic.  On the other hand, I also recognize the difficulties he faces.  I also must say that I have seen his love for the company and for the individuals within the company.
I am taking this time to publicly applaud Corgan for what he has done for R Pro.  While it would be easy to bash him for some of the wrestling plots, I encourage everyone to look a little deeper and see the whole picture.  You don't have to agree with everything he has done to recognize the fact that he has done quite a lot. 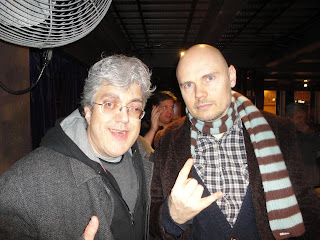