This is a regular series which attempts to combine my lifelong passion for bubblegum cards with my interest in celebrities.  It's been a while since I went with a basketball theme.  You don't see too many pictures of celebrities wearing basketball jerseys.

Justin Timberlake is shown during warmups.  Technically, he is not wearing a real basketball jersey, but there have been plenty of shots of players wearing warmups, including Hall of Famer Julius Erving.  Timberlake is a real 76ers fan and this Celebrity Jersey Card stems from a pre-game shoot-around.  That's good enough for me. 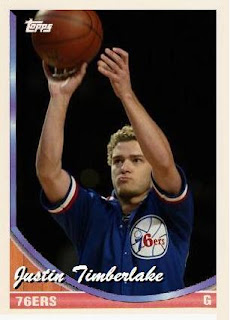 While his real level of basketball skills is debatable, there is no denying Romeo Miller is a talented and versatile individual.  He definitely has court skills, but some of the hype is celebrity-driven.  Lil' Romeo has flashed some nifty moves in celebrity games though, like the one shown below.  This card is unique, in that it would appear that the Phoenix Suns are playing themselves as both the "home" and "away" team.  Only in the world of Celebrity Jersey Cards. 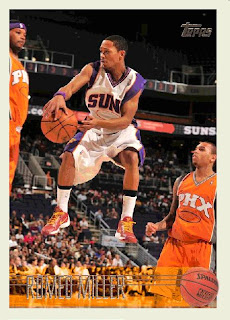