Scott Beatty to the Small Screen?!

Yes, you read that right.  My partner in crime on the wrestling scene, Scott Beatty, was tabbed to appear in A Piece of the Game, a forthcoming television show about sports memorabilia.
As you all know, Scott is the man behind AU Sports, the world's biggest and best sports collectibles store.  Most of my collection was built through AU Sports or with their assistance.  Housing well over 4 million baseball cards and other great stuff, AU has what you want or it probably doesn't exist.
Scott will be an appraiser on A Piece of the Game.  This is right in Scott's sweet spot (baseball pun intended), as he does it regularly among his other roles at AU.
The producers of APOTG are calling for anyone who would like their piece of Chicago-related sports memorabilia to be appraised free on the first show taping, which will be Monday, March 4 at Harry Caray's at Navy Pier.  That first episode is scheduled to air on WGN on March 16.
I will be at the taping.  My only question is what to bring.  I could bring my game-used Jody Davis bat, my autographed Ernie Banks baseball card, my Gale Sayers signed football, my Bob Love signed photo, my Sutter family autographed puck collection...  Hmm this is quite a conundrum.  I need to pick the item which will give me the best chance of appearing on the show.
Whether I appear on the show or not, I will be covering and reporting on it and all of the other developments for the Patch.com and here as well.  My first report, The Small Screen is Calling Scott Beatty, appeared last week on the Patch.
For more info on the show, including how you can be on it, you can go to APieceoftheGame.tv or the A Piece of the Game Facebook page. 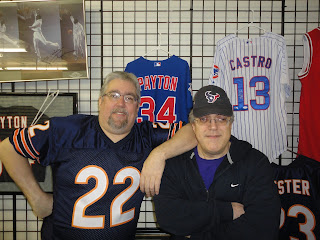 Scott Beatty and me at AU Sports in Morton Grove, IL-February 2012.
Posted by Johngy at 6:00 AM