For years at Lerner Newspapers, I had fun working with George Castle sports columnist extraordinaire.  Castle's area of expertise was baseball and he is one of the most knowledgeable sports writers I have ever seen.  Back in the day, George and I would throw obscure trades trivia at each other.  I did fairly well against him, but he is the master.
George is not a cookie-cutter writer.  He isn't the flashiest.  He is simply a fountain of information and data.  While he has done some radio over the years, he has never found a regular home on any of the big stations, although I believe he deserves a shot.  Castle is also the author of several books (most of which are available on Amazon).  My favorite of his books is Throwbacks, a look at several modern day players who Castle feels are throwbacks.  I have my own signed copy from a book-signing of his (Gee, you'd think he would have comped me on that one). 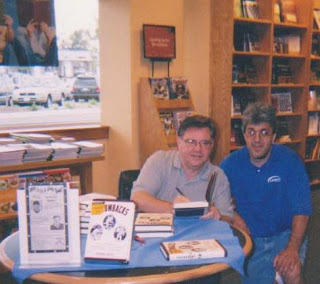