Shane Douglas has been involved in pro wrestling for almost 30 years.  His career had many memorable moments, including being ECW's first champion!
I previously met Douglas about 10 years ago at one of the Brian Pillman Memorial events, but didn't have much of a chance to talk to him.  Last year at Wizard World, I got an opportunity to chat with Douglas on opening night, although it wasn't an official interview.
Douglas talked about being the first ECW champ and the transition from Eastern Championship Wrestling to Extreme Championship Wrestling.  Douglas had a memorable moment when he tossed away the prestigious NWA championship belt in favor of the ECW belt.  Douglas is proud of what he accomplished and had no real regrets.
Shane gave me one of his belts for the photo.  It's always extra cool to hold a title belt, even if only for the few moments of the photo-taking. 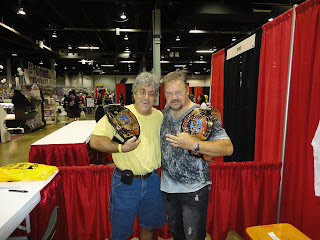