The Ultimate (Warrior) Experience at PCW

Based on the south side of Chicago, PCW is a great wrestling organization.  I have been attending PCW shows for years and I am never disappointed.
A few months back, PCW was holding an event and they had the Ultimate Warrior as a special guest.  The Ultimate Warrior was one of the biggest names in wrestling in the 90's.  He had a great run in wrestling, but after he left the scene, he seemed to polarize fans.  Like most fans, I don't know the entire story, but I was still interested in meeting him.
Matt and I got there early and took our place in line.  The line moved very slowly, but the pCW crew, headed by PL Myers, kept everyone apprised of the situation.  The Warrior was going to stick around long enough to accommodate everyone in line.
When we finally got to meet him, we realized why the line moved so slowly.  The Warrior was taking his time with everyone, making sure they got what they wanted.  He posed and signed autographs.  He even made sure everyone was completely satisfied with their pictures.  He also talked to everyone, as much as time would allow.  In short, it was a great experience.
I walked away having a new appreciation for the Warrior.  He gets a bad rap in the press at times, but at least on this night he was awesome.  Later, I learned he stayed until past 1 a.m. to meet every fan.
I have to applaud the Warrior for this effort and also PCW for having him there and for updating the fans all night long.  I have seen situations where lines like this get crazy and bad things happen.  Thanks to the professionals at PCW and the professionalism of the Warrior, everyone walked away satisfied.
For more info on this great organization, check out PCWwrestling.net and follow PCW on twitter. 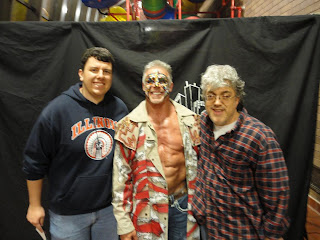 Matt Parker, the Ultimate Warrior and me in Oaklawn, IL-March 2012.
Posted by Johngy at 5:55 AM