The Artist Known as Terry Huddleston

I first met artist Terry Huddleston at a comic con (I believe it was the Motor City Comic Con) several years ago.  I am always on the lookout for good Aquaman stuff and I found some at Terry's booth.
Terry had some beautiful prints of Aquaman and many other super heroes.  He had portraits, busts and full body shots of most.  I think he also does other work, but to be honest, I was too wrapped up in his super hero work to look further.
If you got to Terry's Deviant Art page, you will understand how I could get so enthralled by his super hero creations.  You will also see that he does doe other drawings (such as Kiss), but super heroes are his main subject.
Terry is a pleasant guy, too.  He takes the time to talk to all visitors of his booth, even reporter wanna-be's like me.
I look forward to seeing Terry again at cons this summer and I will report anything new right here.  Until then, check out Terry Huddleston's art page or his Facebook page. 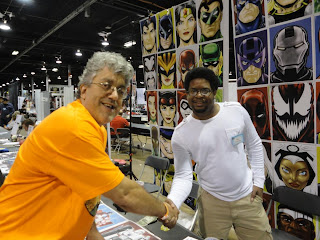