This is a regular series in which I try to combine my lifelong passion for trading cards with my semi-professional interest in celebrities.  I "wrestled" with this week's theme, before settling on the obvious.

Most people call him "King" and after 40+ years in wrestling, it is an appropriate title.  While Lawler gained a lot of his fame in the Memphis area (like another King from that area), he is also well-known throughout the world.  He is a legit Hall of Fame wrestler.  I could have given Lawler a Grizzlies Celebrity Jersey Card, but I decided to go old school with the Memphis Pros.  Therefore, his #11 pays homage to Wil Jones (brother of Caldwell, Major and Charles). 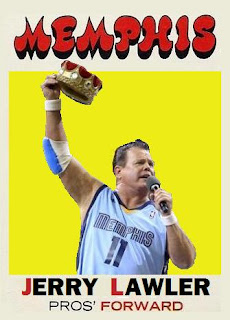 Whether you call him "The Body" or "The Governor", Jesse Ventura always has been at the top of his game. The Minnesota native was a Navy Seal and a pro wrestler, before being elected Mayor of Brooklyn Park (MN) and eventually being elected as Governor.  Since then, he has added author, television host and conspiracy theorist among other titles to his resume.  Ventura remains one of few people from the wrestling community whom I would love to meet, but have not yet.  On his Celebrity Jersey Card, Ventura is showing off his still-massive arms, while sporting Kevin Garnett's #21. 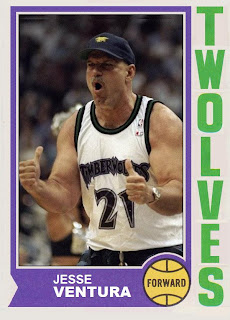 Jesse Ventura is a liar, cheat, and briber. He defrauded the people of Minnesota to become Governor by lying about being a Navy SEAL He was not a SEAL, never in Vietnam, never in combat. He does not have the Combat Action Ribbon. He was a storekeeper on a ship that passed the Vietnam coastline so he was entitled to the Vietnam Service Medal. No big deal there.
Ventura bribed a guy during the primary election in the summer of 1998 and when complaints were filed against him he bribed officials to fix the investigation. This is all documented in my expose' book, ALWAYS CHEAT The Philosophy of Jesse Ventura. The release of my book in the spring of 2002 cancelled Ventura's plans to run for a second term as Minnesota Governor. Contact me for a complimentary book or get one from Amazon.com
Leslie Davis
www.EarthProtector.org
612-529-5253
P.S. Why does Alex Jones keep lying about Ventura being a SEAL?