I love it when I know both people in a Friendly Encounters picture.  Such is the case today, when I feature my friend, the fantastic author Todd Card and fellow author Michael West.
As I have written many times already, Todd is the author I met and befriended at Days of the Dead in Indianapolis in 2011.  He is remarkably talented and more important, he is a remarkable man.
Todd has been open, honest and very iving of his time with me.  I truly consider him a friend, despite having only met him a few times.  We connected on many levels.  I am sure he "gets" me and I think I get him, too.  I am so happy to have gotten to know him.  Due to health reasons, he has stopped doing conventions, but he is very active online and you can still get to know him a bit through HellCometh.com and the Todd Card Facebook page.  Also, our most recent interview with Todd is at On the Beat with Todd Card.
The other author with Todd is Michael West, who I also met and interviewed at Days of the Dead.  West is the author of Poseidon's Children, among other books.  Like Todd, West was very generous with his time during my interview with him.  He gave us some interesting info.  That interview is at On the Beat with Michael West.
Both of these men are talented, funny and friendly.  I often wonder what would happen if two authors like these guys teamed up for a book.  Maybe their styles wouldn't mesh, but I bet it would be interesting.  Of course, there are probably many other author combinations that would happen, too, but I know both of these guys and think it would be fun to see what would happen.  Maybe even ust a short story? 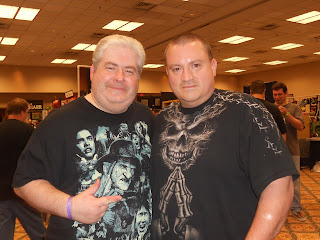 Michael West and Todd Card in Indianapolis, IN-July 2012.
Posted by Johngy at 6:00 AM