Jay Bradley and the Boomstick to TNA Impact!

The first time I saw Jay Bradley wrestle in person was at the debut show for Resistance Pro Wrestling in Chicago.  Jy defeated Icarus.  I interviewed Icarus after the match and he had nothing but praise for Jay.  Unfortunately, I did not get to interview Jay that night.
Since then, I have interviewed and talked to Jay several times, along with seeing him wrestle   He is always good for an entertaining interview and more importantly, you an always count on an interesting match from him.  Right from the beginning, I could tell he was special.
Jay is a hard worker and a good guy.  Hopefully, good guys finish first, at least this time, because Jay has been signed to a contract with TNA Impact Wrestling.
TNA just happens to have a live event in the Chicago area tomorrow night.  I echo the sentiments of all of Jay's fans in hoping that the Boomstick makes an appearance on that show on his home turf.
I have no idea if the powers that be at TNA care what the twitter universe thinks, but just in case, I urge everyone to tweet their support for Jay.  Check out Jay's twitter page to see all of the well-wishers.  Feel free to tweet to TNA Impact that you want to see #Boomstick Thursday!  This would be great for Jay, his fans and R Pro.  Let's get Boomstick on Impact!
To learn more about Jay Bradley, check out the Jay Bradley Facebook page. 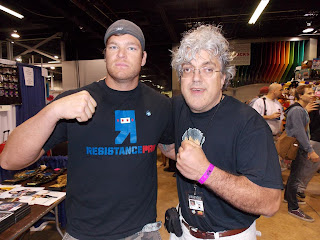