In our never-ending quest to bring you interesting things (and to experience cool stuff ourselves), Scott Beatty and I took in a night of roller derby action thanks to the hospitality of the Windy City Rollers.  I can sum it up quickly by saying we had an absolute blast, but allow me to give more details.
My first contact with the Windy City Rollers was with Jule B. Sorry of the Fury, one of four teams for WCR.  Jule was very gracious and accommodating.  I was excited that this was off to a great start.
Upon entering the UIC Pavilion, we were immediately met by press liaisons Dinah Party of the Fury and Mack Savage of the Manic Attackers.  They could not have been any nicer or more helpful.  With interviews set up for later, they told us to check out the playing area and enjoy the action.
I have to admit that prior to our WCR involvement, most of our roller derby knowledge came from watching it on television as a kid.  That roller derby was much different as we would learn.
Unlike the roller derby of old, this roller derby is a legitimate sport.  Aside from the fun names of the competitors, nothing is fake or scripted.  There is real competition and real scoring.
By the time the first game started, there was an impressive-sized crowd.  The crowd was a mix of all ages and was really into the action all night (as you will later hear on our interviews).
For the uninitiated like us, the announcer gave a brief explanation of the rules and play of roller derby.  This included several players actually demonstrating the various rules and moves.  What a cool idea.  We felt confident we grasped the basic concept and watching the actual game would make all clearer to us.
In the first game, the Fury beat Hell's Belles 255-184.  The Manic Attackers defeated the Double Crossers 241-88 in the second game.  At 2-0, the Fury is now in first place in the WCR home standings.  The action was intense and the women really impressed both of us.  By the end of the night, we were really getting into it and having a lot of fun.
As I stated at the start, we had a blast.  We really appreciate the time and consideration given to us by the individual players and all involved in the WCR.  It could not have been a better experience and we look forward to returning.
This is just a taste of what WCR and roller derby is.  Over the next few days, we will be presenting interviews we did at the game with players from each team.  I strongly encourage everyone to check out their local roller derby online and in person.
For more information on the Windy City Rollers, check out WindyCityRollers.com and the Windy City Rollers Facebook page and follow WCR on twitter. 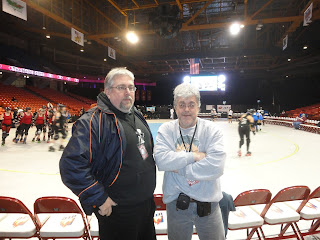