Back in the day, I think I was the only male kid not to really like the tv show Starsky & Hutch.  While my friends debated whether Starsky or Hutch was the coolest, I just was ambivalent towards both of them.
Years later though, I found myself firmly planted in Paul Michael Glaser's corner (not against David Soul however).
Glaser's first wife Elizabeth contracted AIDS through a blood transfusion while giving birth to their daughter Ariel.  Tragically, both Elizabeth and Ariel died within a few years.
Paul Michael and Elizabeth founded the Elizabeth Glaser Pediatric AIDS Foundation prior to her death.  The goals are to prevent pediatric HIV infection and eliminate pediatric AIDS.
Glaser isn't just a figurehead of this non-profit organization.  Glaser is the heart and soul.  At every celebrity convention, he has info sheets on the foundation and will gladly discuss it with you.  Glaser keeps his deceased wife and daughter alive in memories through his great work.
Of course, he will also discuss his career. He knows fans are there to talk Starsky and he is always willing.  He simply has other important topics ready and visible at his table.
I respect him greatly for what he has survived and for what he has been doing.  This is much greater than any success he had as Starsky. 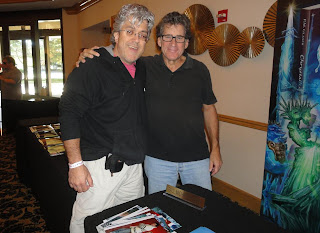 That is a great way to remember his wife and child! Great guy!