The End of the Rick Stelmaszek Era?

After 32 years as a coach with the Minnesota Twins, Rick Stelmaszek was not offered a contract for 2013.  Technically, the Twins did not fire him.  They just chose not to rehire him.
Rick's carer started when he was drafted by the Washington Senators in 1968.  He made the majors with them in 1971, the Rangers in 1973, the California Angels in 1973 and the Chicago Cubs in 1974.  His playing career ended after the 1978 season, in which he managed the Wisconsin Rapids Twins and also played a bit.
In 1981, he was promoted to the Twins and he stayed there for the next 32 seasons.  This put him third all time (behind Nick Altrock and Manny Mota) for most years coaching with just one team.
I have written about Rick many times (probably more than I have any other subject).  I have a long history with him, going back to my childhood when his wife was my third grade teacher and they lived across the street from us.
I am sure it will be very weird for him this season as he experiences life away from baseball.  It's weird for even me to experience baseball without him.
The Twins have been struggling of late, but I don't think anyone saw his departure coming.  Replacing the bullpen coach generally isn't the main ingredient to a successful season.  Of course I do not know how it all came down, but I would have hoped that after 35 years in the organization, his departure would have been handled differently (but perhaps I need only look back at my unceremonious departure from Lerner Newspapers after 17 years to remember the uglier side of business).
Whatever happened and whatever lies in Rick's future, I would like to publicly thank him for a lot of great baseball memories.  He always was a class act and a good friend. 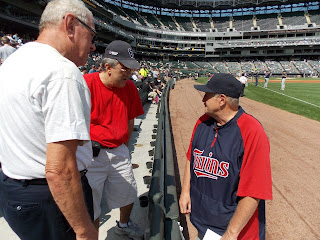 Nice tribute to a nice guy!