This is a regular series which attempts to combine my lifelong passion for bubblegum cards with my interest in celebrities.  Today is WrestleMania XXIX and I am featuring wrestlers in honor of the biggest wrestling event of the year.

Randy Orton is a third generation wrestler.  Son of Cowboy Bob and grandson of Bob, Randy has already established himself as one of today's best wrestlers.  Orton hails from St. Louis, but wore the Nuggets jersey for a special match in the WWE.  I will take a guess and say his #15 is for Carmelo Anthony.  Orton is part of a big tag match today and there is a rumor that he will turn on his partners and become a heel again. 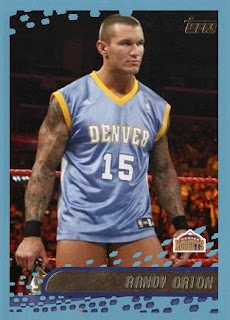 Ted DiBiase is also a third generation wrestler.  Hi father was Ted Sr. and his grand father was Iron Mike.  DiBiase has not experienced as much success as his former Legacy stable mate, but he i still young and talented enough to carve out an excellent career.Although you cannot see it, DiBiase is wearing #4, which I am connecting to Kenyon Martin.  DiBiase is not scheduled to be on the card today, but hopefully we will see him return in the future. 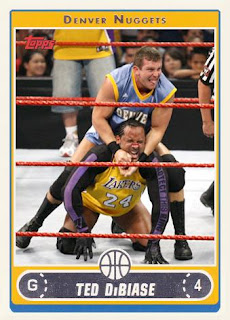 Are these for sale?