As I have written, my dad got me my first autograph.  He got Billy Williams and Tom Bradley to sign a sports banquet booklet from my grade school.  He got my my first signed baseball (from neighbor Rick Stelmaszek).  He encouraged me to ask for my first in-person autograph (from Mike Wegener).
Since my mom passed away, he has struggled with filling his time and keeping busy.  Lately though, he seems to have discovered the joy of meeting celebrities.
There are a couple of places he meets athletes near his home in Indiana.  He started out with just getting a signed picture.  He has quickly graduated to asking me to get cards and having his "schedule" planned out.  Honestly, he is getting more fanatic than I ever was.
He likes meeting the players (mostly ex-Chicago athletes) and then telling me the good (or bad) of the experience.  He was surprised at how easy it was to get someone else to take his picture with the athlete.  It is sort of like he took a crash caourse in autograph collecting.
The picture below cracks up everyone of his family and friends.  He looks giddy.  He even looks like he is sitting on Murray Bannerman's lap.  He did say that Bannerman was great (although I am not convinced he wanted my dad sitting on his lap).  Okay, I know, my dad isn't really sitting in his lap (is he?).  Well, I hope not, at least.
Either way, it is great to see my dad doing something...anything...to keep busy.  It is also pretty fun to see him "get" the hobby which I have loved for so long.  It is also good to have him give me an easy Friendly Encounter. 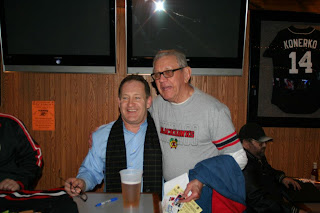 Murray Bannerman and Frank Wroblewski in Griffith, IN-Winter 2012.
Posted by Johngy at 6:00 AM