Chicago Rush Coach Bob McMillen is a finalist for the 2013 Arena Football League Hall of Fame.  Aside from guiding the Rush to the championship this year, a Hall of Fame election would be the best reward for McMillen.
I have followed McMillen's career since his time at Illinois Benedictine.  He went on to play 13 seasons in the AFL, the last 5 with the Rush.  He holds numerous records, won many awards and was selected as one of the 20 greatest players in the AFL history.
This is a no-brainer.  McMillen should be a lock.  I don't even need to plead my case.  Look up McMillen's career stats and you will agree.
It would be a great time to elect him.  He has endured a chaotic several months because of the Rush ownership issue, but he has remained positive and he has made sure the team stays positive.  I have seen and talked to him in practice, before and after games and on off days.  He never strays from his positive outlook.
After some losses, I have sen him get angry, frustrated and even bewildered, but I have never seen him get negative.  He is completely focused on keeping the team on track and heading to the playoffs.
I never pretend that JohngysBeat is on par with the major media outlets, but McMillen treats my crew with respect and friendliness.  We have never had anything less than a pleasurable experience with him.
McMillen is a pro.  He is proving to be a great coach.  He is definitely a guy who Chicago embraces.  He is without a doubt a Hall of Famer.  Now it is time to make that official.
Current Hall of Fame members and Arena Football fans can make that happen by voting online continuing through Friday, July 26, 2013.  I encourage everyone to join JohngysBeat.com and vote for Bob McMillen.
The 2013 Hall of Fame class will be announced during the 2013 Conference Championship weekend.  .While McMillen works at getting the Rush there, we need to work at getting McMillen inducted! 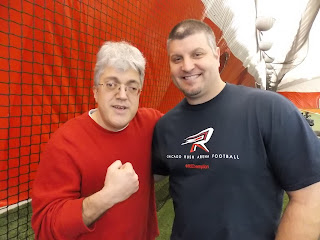