I met "The Ego" Robert Anthony at a Resistance Pro event about 18 months ago.  I watched Ego become one of the most popular wrestlers at R Pro and eventually he became the champ (a title he still holds).
Ego has been known to call the R Pro venue "the house that Ego built" and I can't really disagree.  He has consistently put on excellent matches.  His match with John Morrison was worthy of "Match of the Year" honors.  His wrestling skills in the ring seem to be ever-improving and his fanbase is ever-expanding.  Ego is gold!
Earlier this year, Ego posed with Billy Corgan, R Pro's Creative Director, at a Bulls game.  Ego is a big Chicago sprts fan and can be seen wearing various Chicago jerseys.  He is an ideal candidate for a Celebrity Jersey Card and his day will come.
Don't just take my praise for fact.  Come out to an R Pro event and see for yourself.  In fact, on Friday, July 27, you can watch an R Pro show in Willowbrook.  Go to ResistancePro.com for all of the details. 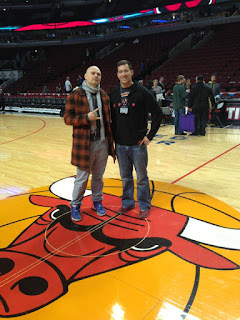