Coming Soon: Days of the Dead

In a few days, Cuzz Gekas and I will be heading to Days of the Dead in Indianapolis.  We have been to both previous Days cons in Indy, making this our third Indy Days.  (We have also gone to the one Chicago Days and will be going to the second one later this year.)
Days is a great con, mostly because the main man behind it is Adolfo Dorta and he works his butt off to make sure it is a great con.  He is unlike any convention organizer I have ever met.  He cares so much about the attendees.  He is a constant blur of activity at the con.  I am not sure he even has a moment to enjoy the activities!
I go to a lot of conventions for their guest lists and Days is no exception, but I also go to support Adolfo.  The man is just that good.
I have seen others take shots at Adolfo on Facebook and elsewhere.  Sure, other convention organizers are probably scared of his success.  Right now he has four Days cons (Indy, Chicago, LA and Atlanta), but if all continues to go well, I could see him adding a couple more.  Even if he doesn't expand to other cities, he will most certainly keep improving the ones he has.
Yes, I like Adolfo and yes, other convention organizers should take notice.  He is making a big difference on the convention scene. 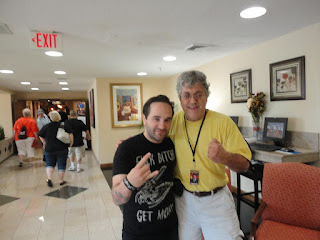