Everyone in my age group (actually, all age groups) is familiar with The Brady Bunch.  We all grew up watching it.
Like most shows, the actors seemed far away and so out of our realm.  I would never think that one day I would be meeting so many of these celebrities, let alone having real conversations with them.
Thanks to the celebrity meet-and-greet conventions like Motor City Comic Con, these celebrities are now completely accessible.  How cool is this?!
I have met the three of the Brady kids (Peter, Bobby and Cindy), as well as cousin Oliver.  Barry Williams and Maureen McCormick have done similar shows, so I think I will eventually meet them, too.
This never stops being surreal for me.  I stare at the picture below and think about sitting in my house as a kid and watching Bobby Brady get into all sorts of mischief on the screen.  Larger than life.  Miles away.  A completely different life.
Yet, there we are.  Johngy and Bobby.  John and Mike Lookinland.
Especially cool is that Lookinland was very nice.  He even did a Johngy promo (which is in the right column on this page).  Over the few times I have met him at various cons, we have talked about his life, the conventions and other stuff.  I even witnessed him and Susan Olsen bantering back and forth like, well, like two siblings.  And I was right in the middle of it.
I don't know why I get such a rush from this.  Maybe a psychologist can answer that for me.  Instead, I will just continue to attempt to meet these favorites of mine and continue having a fun time.
Eve Plumb...where are you? 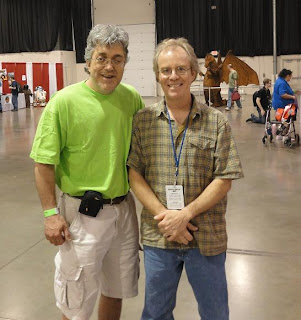