This is a regular series which attempts to combine my lifelong passion for trading cards with my semi-professional interest in celebrities.  Hockey season is over, which means we now only have baseball.  Oh dear.

I want to like Kelsey Grammer more than I do.  I am not sure why I don't like him more.  I loved Cheers,  I enjoyed Frasier.  Sideshow Bob is classic.  He even portrayed the Mayor of Chicago in Boss (which co-starred Kathleen Robertson, who you will soon see here).  It was his role on Boss which lead to his appearance at US Cellular.  I am not sure why he is wearing Luis Aparicio's #11, unless it represents the debut year for Boss.  I do like his Celebrity Jersey Card, but then again, I like most cards which don't show the standard pitching shot. 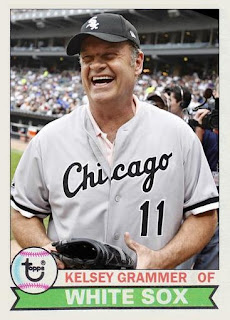 Unlike Grammer, I found no connection to Chicago for the Dallas native Nick Jonas.  The oldest of the Jonas Brothers probably was just one of the hundreds of celebrities who have sung the 7th inning stretch at Wrigley Field.  I am not a fan of Jonas, but I like that he stepped into the batting cage  It makes for a rare Celebrity Jersey Card action shot.  Notice the incoming pitch on the right edge. 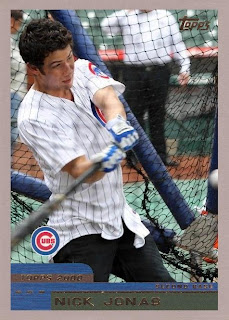 My daughter would faint if I pulled that Nick Jonas card from a pack.