Richard Masur Takes It One Day at a Time

Richard Masur is one of those guys.  You have seen him hundreds of times in movies and on television over his forty year career..  He has appeared in many iconic shows and movies.  You immediately know his face when you see him.
I first saw him as David on One Day at a Time.  That was followed by The Thing, Risky Business and countless other roles.  Despite his lengthy and successful career, I always think first of One Day at a Time.  As far as I can tell, that is just fine with him.
Masur is very low-key.  He had a shaved head for an upcoming project, but he was just as interested in talking about The Thing, the convention or anything else.
Masur seemed to get the convention concept.  He was there essentially because off his participation in the Thing (there was a mini-reunion there).  He happily signed pictures and posed for pictures.  He did not cringe when I mentioned One Day at a Time.
Meeting Masur was like shooting back to my teenage years watching One Day at a Time.  Back then, I never imagined one day I would be talking to him.  It is always a bit surreal.  I walked away from Masur feeling really good, almost like a kid again.
Thank you Days of the Dead for another great guest.  Thank you to Masur for certainly more than "one day." 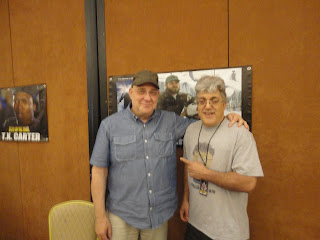