I first saw Stacy Haiduk when she played Lana Lang on the Superboy television series of the late 1980's.  While even then, I bristled at another show about another superhero instead of Aquaman, my anger was greatly lessened by the lovely Haiduk.
Since then, she has acted regularly in films and on tv.  I have not seen everything she has done, but I have caught her many times,. including during her stay on All My Children, her role in Sketch Artist and more.
When I heard that Haiduk would be at the Motor City Comic Con this year, I put her on my "must meet" list.
Haiduk had a lengthy line and she received an award from some Star Wars group, but I patiently waited.  It was Stacy Haiduk...a few extra minutes would not deter me.
Haiduk was as sweet as could be.  We talked  for a few moments an she even made sure I was satisfied with the picture we took.  I did not get to interview her, but it was still a great experience.
Haiduk has her own site at StacyHaiduk.info, as well as a Stace Haiduk Facebook page and a Stacy Haiduk twitter page. 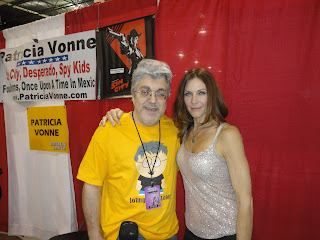 That was a great show. She was awesome

She still looks great and was very sweet.