This is a regular series which attempts to combine my lifelong passion for trading cards with my semi-professional interest in celebrities.

Stone Cold Steve Austin is a native Texan, but somehow he found his way into a New York Mets uniform.  He does get extra points for his number.  It isn't quite the three digit number which I have long desired, but it is close.  Former Mets Manager Bobby Valentine might get a "Stunner" courtesy of Stone Cold, for that elbow he is giving.  My money is on Stone Cold if they ever really hook up. 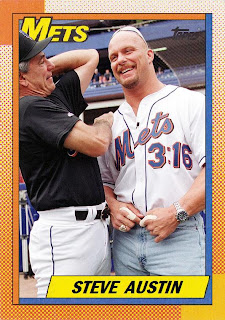 George "The Animal" Steele is a Michigan native, but somehow he found himself in a Red Sox uniform.  Steele was a hated villain, who eventually became a lovable simpleton.  Either way, he enjoyed his share of turnbuckles.  I don't think he will have much luck with that baseball, however.  Still, I will not be the one to tell him.  Even at his age now, I am pretty sure Steele could do some damage.  Notice his Celebrity Jersey Card position designation is INF-OF, because as any fan of his knows, he was all over the place! 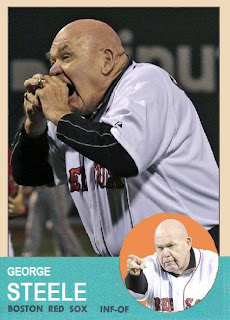