I met Michael Bradley through Resistance Pro Wrestling.  (Chalk up another good thing attributed to R Pro).    later, I saw him as a guest on the T3 podcast and I was amazed to see a man of his size do a kip-up.  Clearly, the man was athletic.
Over the last couple years, I have seen Michael work very hard at...well, just about everything.  He has done some in-ring training.  He has appeared on several wrestling shows, most notably R Pro's events.  He works at various conventions.  Michael seems to be everywhere.
He also has dropped some weight and looks to be making a run at a potential run as a wrestler.  He has the athleticism already (as witness with the aforementioned kip up).  He has the attitude, charisma and look.  Why not?  Plus he is a good guy.
At last year's Wizard World, Michael met Kevin Nash.  Somehow Michael or other R Pro people got Nash to don the R Pro shirt.  That is definitely cool.  I have my own collection of JohngysBeat.com shirt-wearers, but I have yet to get Nash, but I digress.
I like seeing people like Michael with other celebrities.  Michael works with these people, but still likes to meet them and get pictures.  Some day, Nash might even say he had a picture with Michael.  Fortunately, I already have a few pictures with Michael. 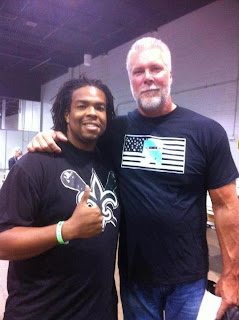 Michael Bradley and Kevin Nash in Rosemont, IL-August 2012.
Posted by Johngy at 6:00 AM