Johngy Goes (to the) National

The National starts today.  The National is the big yearly sports collectibles convention.  It moves around and this year it is in Rosemont (just west of Chicago).
Obviously, Scott Beatty and Frank Caputo of AU Sports will have a big booth there.  They display a smattering of what they sell in their store.  They also meet new customers and new sellers.
Also at the AU booth will be Brian O'Donnell.  He has an interesting collection mainly centered around old scorecards.  Oh for the days of actually keeping score at games!
Additionally, I am sure Sal Barry will be roaming around.  Sal runs PuckJunk.com and is obviously a hockey fan.  (How about those Hawks?!)  Sal is always looking to add cool stuff to this hockey collection.  I like the Penguins jersey.
Oh sure, the National also has a lof of ex-players signing autographs, usually at high prices.  Fortunately, I don't collect autographs as much as I once did.  I think I got out in time!
I usually go and hang at the AU booth for a while.  If I am lucky, I get an interview or two with some athlete.  Either way, I have a lot of fun at the National and other similar, smaller conventions.
The National runs through Sunday.  If you go, stop by the AU booth and tell them Johngy sent you.  It will get you absolutely nothing, except maybe an odd smile or two. 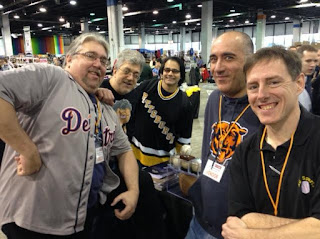 Scott Beatty, me, Sal Barry, Frank Caputo and Brian O'Donnell in Rosemont, IL-April 2013.
Posted by Johngy at 6:00 AM