It's true, Kelli Maroney and I enjoy Flashback Weekend.  Okay, it is no secret that I have enjoyed this great
convention for years.  Flashback Weekend was one of the very first celebrity conventions I ever attended.
I have proof that actress Kelli Maroney also enjoyed Flashback Weekend.  She said it herself (or technically she wrote it).  In a story I did last year, I wrote about Flashback Weekend and meeting Maroney, one of my all-time favorites.  Maroney read the piece and responded in the comments section that "Flashback Weekend was a fun convention."  I probably would not argue with Maroney in any case, but in this instance, I totally agree with her.
I was stunned when I saw that she left a comment.  It was a very sweet thing for her to do.  I also think it shows that she really did enjoy the convention.
This year, Flashback Weekend is being held August 9-11 at the Crowne Plaza in Rosemont, IL.  The headliner this year is George A. Romero.  There will also be reunions of Dawn of the Dead, Pet Sematary and Lords of Salem, among other great attractions.  Horror television legend Svengoolie will also be there.
If that isn't enough, the JohngysBeat.com crew will be there talking to celebrities, doing interviews, meeting fans and more.  If you see us, come on over and greet us!
Seriously though, this is a great convention.  It is small enough to not be overwhelming and insane, but it packs in a lot of great stuff.  It is a "can't miss" on my convention schedule!
Check out FlashbackWeekend.com and the Flashback Weekend Facebook page to get all of the info.
Remember...Kelli Maroney and Johngy like Flashback Weekend.  I am sure you will, too! 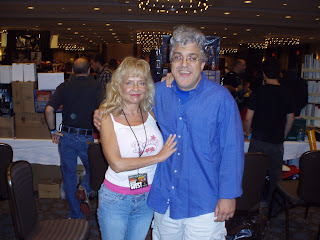