Even as a kid, I always wondered why some fictional characters were named "blank the blank," while others eliminated the "the," but kept the generic identifier at the end.  On one side were Yogi the Bear, Winnie the Pooh, Kermit the Frog and others.  On the other side were Bugs Bunny, Donald Duck, Daffy Duck and more.  Some even changed midstream, such as when Smokey the Bear became Smokey Bear.
This drove me crazy.  I was not Johngy the Kid or Johngy Person.  I was just Johngy.  Did Porky Pig really need "pig" attached to his name.  We all knew he was a pig.  So all of the pigs in any Porky cartoon automatically had "pig" as their last name.  It seemed rather unnecessary.
Then there is the case of Oscar the Grouch.  What is a grouch?  Were they referring to his disposition?  Were they "creating" a new animal called a grouch?  Were they intentionally noncommittal?
If they were going for disposition, then where would it end?  There would be too much labeling.  Bill the Jerk.  Tony the Optimist.  It would get out of hand.
On the other hand, trying to act as if a grouch was a real animal classification.  If the grouch can be an animal, then a dope, goof, slob and more could also be.
See all of the minutiae that ran through my head as a youngster?  Do you see why I am what I am today?  Does that explain JohngysBeat.com just a bit better?
This brings me to the focus of this piece.  I met Oscar the Grouch in Ls Vegas (NV) in May.  I started to go into my analysis.  How did I know "Oscar" just wanted the picture taken and his.her tip given.
Jeez, he really was a grouch.  Maybe it is starting to get clearer to me now. 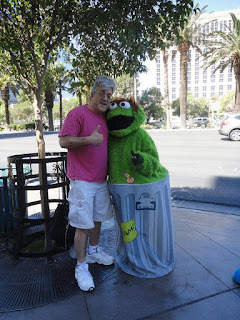 Just love all those characters in Vegas! Nice pic!