David Herro is a SuperFriend

David Herro is the man behind Great Lakes Championship Wrestling (GLCW) based out of Wisconsin.  I went to my first GLCW show last December (Blizzard Brawl) and I was very impressed with the product and the people involved.
I don't run a wrestling company, but Dave and I have at least one thing in common.  The answer is in the picture.  We both have our own shirts.
Regular followers of Johngy's Beat will know what is coming next.  A JohngysBeat.com SuperFriends shirt seems like a natural.  In fact, it is already done and will be debuted at the next GLCW show.
Speaking of that next show, it is on Friday, October 4 in Milwaukee, WI.  Shenanigans is loaded with wrestling stars, as well as the talented roster of GLCW wrestlers.  Tommy Dreamer, ODB, Al Snow, Armando Estrada, Joseph Park and many more stars will be at Shenanigans.  Oh and I will be there, too, and I will be debuting the new JohngysBeat.com SuperFriends shirt!
This promises to be a great show.  I encourage everyone to go to the GLCW website for more information and to purchase tickets.  Go for the wrestling legends.  Go for the young stars of GLCW.  Go just to see the new JohngysBeat.com SuperFriends shirts!  Just make sure you go! 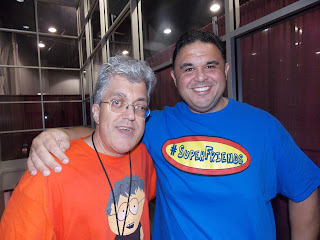