Today is a special Friendly Encounters (although, aren't they all special?).  Today, twelve year old Noah Sanchez get his first feature.
Noah is the son of my first cousin's son (or my first cousin's grandson or my first cousin twice removed).  Got it?  Well, I am not about to explain it further.  Anyway, Noah is Ernie's son.
I thought it would be fun if Noah did a few interviews at Wizard World and Noah quickly agreed.  I am all about expanding the JohngysBeat.com Media Group and I thought Noah would be perfect for Wizard World...and he was.
Noah handled several interviews with very little preparation.  He did an excellent job.  I really got a kick out of seeing him interact with the interview subjects.
One of the people he interviewed was Sara Richard, one of JohngysBeat.com's favorite artists.  I stumbled upon Sara years ago at a convention and I have periodically gone back to her for updates on her career (and her love of dinosaurs).  You can learn more about her at SaraRichard.com.
This time, young Noah got the scoop from Sara.  It was fun watching them interact.  Noah was very professional and Sara did a great job of working with him.  I really appreciate Sara for her time and consideration always and I appreciate her immense talent.  I also appreciate Noah for his first JohngysBeat.com effort and for being a great kid. 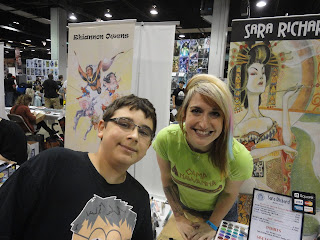 Noah Sanchez and Sara Richard in Rosemont, IL-August 2013.
Posted by Johngy at 6:00 AM