The Chicago Bears are now 3-2 after starting 3-0.  Tonight they will play the New York Giants who are 0-5.  I am a bit scared of this game.
Putting my Manning family love aside, realistically the Giants will not go 0-16.  Both teams are coming off of a short week of practice.  The Bears do have the home field in their favor.
In honor of this matchup, I am featuring Steve Edwards, an offensive lineman who played mostly for the Bears, but finished his NFL career with one season with the Giants.  He also played in the Arena League, most notably with the Chicago Rush.
Edwards is a local guy, having gone to Mount Carmel High School (my alma mater).  He started 16 games for the 2003 Bears.  He was also a great fit for the Chicago Rush.
Edwards brought veteran leadership, NFL experience and a great attitude to the Rush.  He was always very nice to us as we covered the team.  I was able to see him helping others up close during practice.
With the demise of the Rush, I am not sure where Edwards will land.  I wish him well though and hope to see him down the line.  Speaking of the line, I really wouldn't mind seeing him on the offensive line for the Bears. 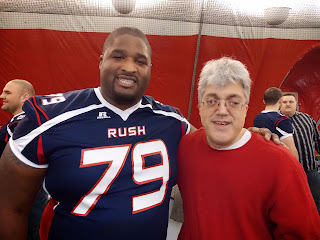