Lamenting the Loss of the Chicago Rush

Last weekend, I received the sad news of the demise of the Chicago Rush.  I am really bummed about this latest development in the Rush saga.
I got involved covering the Rush for the 2012 season.  Last season, it all really came together.  I was at practices, games, media sessions and anywhere else a Rush event was.  I interviewed players, coaches and staffers.  I was having a fantastic time and loving every minute of it.
The season started great.  A new owner promised a fresh start.  The owner seemed like a good guy.  He always treated us well.  Unfortunately, there were financial issues and the league took over ownership.
The Rush were forced to play games in Rockford.  They were even forced to play their playoff game away, despite earning the right to host it.
Rumors were around all season.  Fellow writers and Rush staffers all agreed that the AFL needed a team in Chicago and the rest should work out.  Unfortunately, it apparently did not work out.
The AFL asked for 2 year commitments from all teams.  The Rush have no ownership.  No such commitment could be made.  It sounds ridiculous, but the end result is that there will not be a Rush team (or any team in Chicago) at least for the 2014 and 2015 seasons.
I would like to thank everyone with the Rush for being so professional and so friendly.  I could not have been treated any better.  I do not have one single complaint at all.  I truly loved this experience. 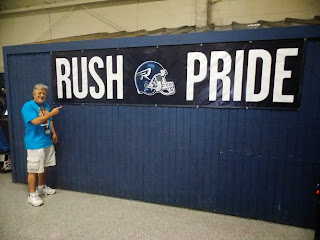 Sorry to hear the end of the Rush team. Maybe someone will start another one up in a few years!