This is a recurring series which attempts to combine my lifelong passion for sports trading cards with my semi-professional interest in celebrities.  Today, I pay my respects to Ohio baseball.  While it is true that both the Indians and the Reds got bounced in the Wildcard one game playoff, at least they made it (unlike Chicago teams).

Jerry "the King" Lawler was born in Memphis, TN and enjoyed most of his pro wrestling success there.  He has won many titles over his 40+ years in wrestling.  He is a long-time fan of the Cleveland Indians and often can be seen wearing their jersey.  For his Celebrity Jersey Card, he tossed out the first pitch at an Indians game a while back. 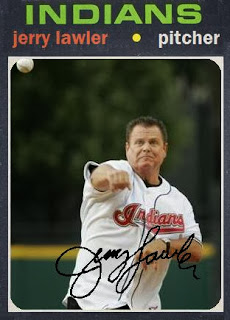 Michael Balzary, better known as Flea, is an Australian-born American musician and actor.  I have seen him in several pro jerseys, but for his Celebrity Jersey Card, I used a batting practice shot.  I love the shot.  Flea is seen through the netting and he is just starting his swing.  This reminds me of actual cards I love. 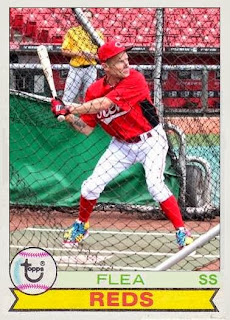