This is a recurring feature which attempts to combine my lifelong passion for sports trading cards with my semi-professional interest in celebrities.  Today, I pay homage to the 2013 World Seris opponents.

Kenny Wallace come from a auto-racing family.  The Maryland native has had a lengthy career, but I am not sure of his connection to the St. Louis Cardinals.  I think he just threw a first pitch while in town for a race.  If his Celebrity Jersey Card featured a number, it would have been #29 to represent the card he drives. 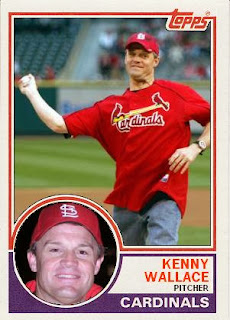 Actor Mike O'Malley was born in Boston and is a lifelong Red Sox fan.  I don't ever remember him wearing a Red Sox hat on Yes, Dear, but that was probably because of legalities.  He threw out the first pitch at Fenway in 2006.  On O'Malley's Celebrity Jersey Card, we have an appearance Kevin Youkilis, which makes this card really fit into the 1991 set. 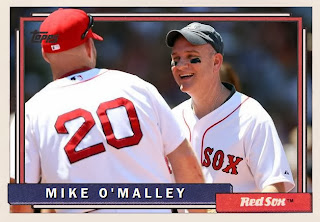