Today I am featuring Mike and Nicole Bellcaster, a couple I met through Resistance Pro Wrestling.  Mike and Nicole started out as fans, but quickly worked their way into positions as the Official Timekeeper and the Merchandise Maven, respectively.
They are a young, fun couple, who love wrestling and R Pro.  They got married in a wrestling ring, surrounded by family and friends, including many members of the extended R Pro family.
The couple went to Las Vegas in 2012 for the Cauliflower Alley Club event.  There they met many wrestling personalities.  One that really stood out to me was Jim Ross (aka JR).
Ross is a wrestling legend for his broadcasting career.  JR made every match seem interesting, without going overboard.  He is the gold standard for wrestling broadcasters.
I like the juxtaposition of the Hall of Famer Ross with the young wrestling couple.  It is the old and the new, the merging of two generations.
I am proud to know Mike and Nicole and to call them friends.  They are two of the colorful, fun characters at Resistance Pro.  They are also proof that R Pro is more than just wrestling.  It is a big family of great people. 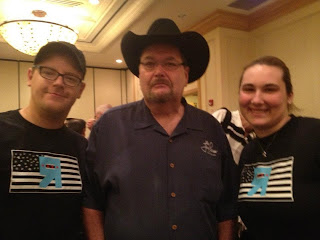