The Chicago Bears and the Detroit Lions are 5-3 and tied for first in the NFC North division.  Today, the Bears host the Lions for first place.
When we went to Detroit to see the Bears play the Lions last season, I met a lot of Lions fans.  Most were okay, fun-loving football fans.  Some were giant tools.  That is to be expected at any sporting event.
One fan stood out big time.  He reminded me of musician Chuck Mangione.  I am not sure if that was his goal, his natural look or just his idea of a good time.  Either way, it was quite memorable.
I would have liked to feature an actual former Lions player in this piece.  I could have used Mike Tomczak as the Lions connection this week, but I have already used him earlier this season.  Besides, Tomczak suffered a broken leg in preseason, thus ending his 15 year pro career.
Left with no other alternative, I am using the Mangione-esque fan.
I am not condemning this fan.  With the much parodied "Chicago fans" making a commercial comeback, I am in no position to criticize a team's fanbase.
The guy was well-dressed, although a bit flashy for my tastes.  He was also very personable, even to Bears fans.
So what is the point of all of this?  The Bears must win.  When the Bears win, I will certainly be saying, "This feels so good." 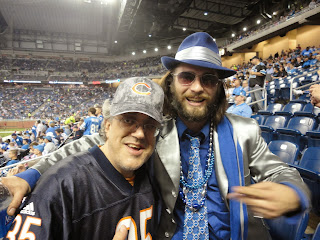 Today's game was so sad ... The Bears should of won!