I knew Steve Iwinski from first grade.  We went through 8 years of Sacred Heart Elementary School and four years of Mount Carmel High School.  We lost touch somewhere in our college years.  He eventually moved to Indiana and I moved north of Chicago.
I took Drivers Ed with Steve.  I played street football with Steve.  We listened to music at Tom Skalski's house.  These were all great times.
I can't say we were ever best friends.  Like a lot of kids, we had our battles.  I have to admit my childhood problems had more to do with any of my relationships than the other person.  This isn't about me though, it is about Steve.
Steve passed away a few weeks ago.  I knew he had been ill.  I had reached out a time or two, but misconnected.  I should have tried harder.
At the wake, several Sacred Heart and Mount Carmel classmates gathered around and retold Steve stories.  I wish I had more Steve stories.  He was a fun, good-hearted guy.
I reconnected with his family, all of whom did their best to celebrate Steve's life, rather than mourn his death.  It was brave and uplifting.  It spoke volumes of Steve.
Steve is the first of "my own" who I have lost.  He was too young.  I am deeply saddened for a lot of reasons, but I am going to follow the Iwinski family lead and celebrate Steve, instead of crying.
Along those lines, I present a picture of Steve from when he met musician Huey Lewis.  Good-bye Steve.  You will be missed, but remembered well, by all! 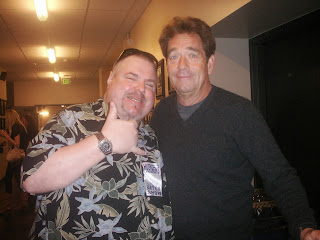 So sorry for your loss of a past friend.

What a nice tribute to a old high school friend, who passed on way too young.....

SEE, I'm not always "Evil" just don't let this get out, it might ruin my "Evil" reputation!!

Archie Bunker would surely have hired the Law team of:

EZ-In high school, one teacher attempted to be funny by saying we should join the ski club. We also had another friend named Rojewski. Oh my.