Ralph Macchio is perhaps best known for his role as Danny in The Karate Kid.  Do you remember him as Jeremy on tv's Eight Is Enough?  Unfortunately for Macchio, that role was the typical young kid brought to breathe life into a older series.
Of course, Macchio has also done many other films, shows, commercials and musicals.  Macchio is quite talented.  He is also very nice.
JohngysBeat.com's Contributor Extraordinaire Matt Parker and I met Macchio at Wizard World and it as a real pleasure.  We witnessed him greeting and talking to several people who did not even purchase any of his 8x10's or pictures with him.  He went above and beyond the call of duty at such a convention.
Even when Matt and I were meeting him, he took the time to ask our names and other questions.  This stuff might not seem like a lot, but it is just these extra pleasantries that make him stand out.
Macchio was on my short list of celebs I definitely wanted to meet at Wizard World and he did not disappoint.  A few other celebrities should take lessons from the Karate Kid! 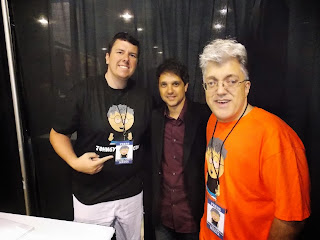 I'm a huge Karate Kid fan. That's awesome that you got to meet Daniel-san.