Past and Present with James & Kristy McNichol

I first saw Kristy McNichol when she was playing Letitia "Buddy" Lawrence on Family.  She earned two Emmy awards for Best Supporting Actress for the series.
James McNichol appeared in many commercials and then starred on tv's The Fitzpatricks.  McNichol mostly retired from show business in the 1990's, but is making a return.
I had the pleasure of meeting the McNichol sibling at the recent Hollywood Celebrities Show, where they were one of the most popular attractions.  They don't do many appearances, especially out this way and they are beloved child stars (although Kristy had several great adult roles, too).
I have to applaud both of them for going out of their way to make sure their fans were completely satisfied at the show.  When they were taking pictures with fans, they had to move to the corner area for the best lighting.  Again, this might not sound like much, but when you have to do it dozens of times an hour, it can be tiresome.  They never complained and kept cheerful moods.  They gladly talked of their childhood yuears, as well as what they have been doing lately.  In short, they were great guests.
I always enjoy meeting stars whom I grew up watching.  I admit, I probably had a little crush on Buddy.  She was a real sweetheart!  It is cool to see that both were very nice now in person. 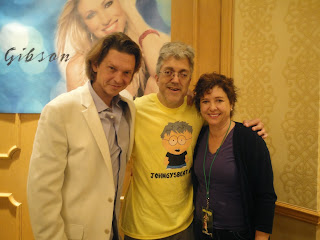 James McNichol, me and Kristy McNichol in Rosemont, IL-September 2013.
Posted by Johngy at 6:00 AM

I used to love watching that "Family" show! Nice to see they survived teenage stardom!