Larry and Johngy (But No Darryl or Darryl)

William Sanderson has been acting for over 35 years.  He is most known as a character actor, appearing in films like Blade Runner and Fletch, along with a lot of episodic television.
Television is where I first really got to like his work.  I am talking about Newhart, where Sanderson played Larry (brother of Darryl and Darryl).
Sanderson's Larry was a back woodsman, whose last name was never even mentioned.  His role on the show got progressively larger, as his popularity grew.  Because of this role, he appeared similarly in other tv shows.
I recently met Sanderson at the Days of teh Dead convention and he could not have been nicer.  He seemed genuinely appreciative of his fans at the con.  I must also give him praise for having a large selection of 8x10's at the event.  It looked like he had a pciture from every major role he had.  That is the way to please your fans.
I think I could have gotten a quick interview with him, if my timing was better.  Next time, I will try harder.  I think he would have some funny and interesting things to say. 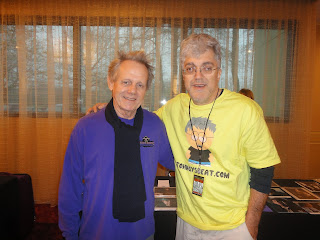 William Sanderson and me in Schaumburg, IL-November 2013.
Posted by Johngy at 6:00 AM