The Chicago Bears are 6-4 and tied for first with the Detroit Lions.  The St. Louis Rams are 4-6 an in last place.  Today they battle each other in St. Louis.
I worry about games like this.  The Bears should win.  Josh McCown is playing well.  The Rams are favored by one, probably mostly because it is a home game for them.
Yet, these games are the kind that the Bears lose.  These are the kind that I can immediately see going down the drain.  These games frustrate me endlessly.
Today, the Bears need to call upon the aura of Dick Butkus.  They need to smash the Rams.  They need to crush them immediately.  Do not leave it to chance.  Do not let up.  Grab the lead and keep the Rams down.
Nobody better exemplifies that strategy than Butkus.
Butkus never let up, not even when his knees were so banged up he could barely walk.  I started watching the Bears when Butkus was already hurting, but I still saw a Hall of Fame player.  I could only imagine how god he was before the injuries.
Since then, I have watch a lot of film on Butkus and he was an elite player.  The Bears have been blessed with a lot of Hall of Fame players over the years.  None deserves it more than Butkus.  Butkus is the Bears.  Butkus is football.
I hope today's Bears do their best to imitate Butkus.  If they come anywhere close, the Rams have no chance. 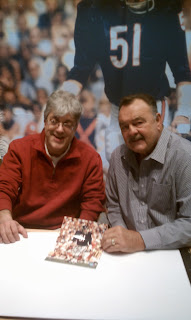 That was a sad loss for the Bears.