This is a recurring series which attempts to combine my lifelong passion for trading cards with my semi-professional interest in celebrities.  In honor of the Bears playing the Cowboys on Monday, I present two talented ladies representing their team.

A native of Fort Worth, TX, Kelly Clarkson rose to fame on American Idol.  She was the winner in the 2002 season and has been successul in the music business ever since.  She stays true to her Texas roots for her Celebrity Jersey Card by wearing Emmitt Smith's #22 while singing the National Anthem in Dallas. 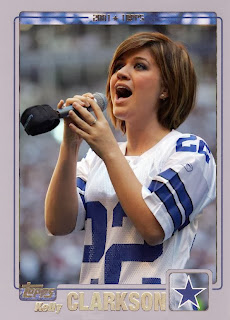 Representing the beloved Chicago Bears is Tara Schile.  I first met Schile at Wizard World, where I interviewed her (On the Beat with Tara Schile).  Tara owns Sincere Costumes, makers of original costumes, masks, decorations etc.  Her work has been used in motion pictures, as well as being purchased by regular consumers.  You can check out her work at TaraSchile.com.  For her Celebrity Jersey Card, Schile is wearing a Bears Santa hat, but seems to be without her occasionally green hair.  I thought she might have gone orange and blue on this one. 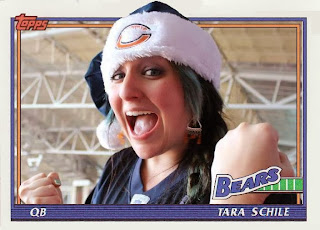